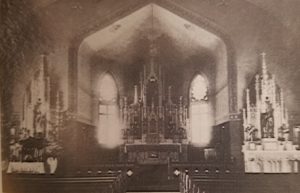 Followers of Fr. Jacques Marquette are thought to have passed through and ministered to people in the Oscoda area before 1675. In 1866, Fr. Murry, parish priest of Alpena, established the first mission and was able to purchase 3 lots in AuSable. Following him in 1870, Fr. Patrick Duhigg built a small chapel. Bishop Borgess, of Detroit, gave the first Sacrament of Confirmation in 1871. After Fr. Duhigg left, AuSable reverted back to a mission served by Alpena.

Fr. Roche became the first resident pastor in 1875. He built a church referred to as “Beautiful Sacred Heart” and added a school staffed by the Daughters of Charity. The school started with 50 pupils and later expanded to 250. The logging industry was started here and the population grew rapidly. 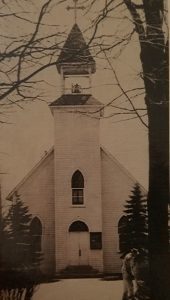 Succeeding Fr. Roche in 1884 was Fr. P.C. Winter who added a rectory and a building, in Oscoda, to serve as a branch church and school. Fr. Winter also had Fr. Russeman as an assistant.

In 1894 Fr. J.E. Mahar became pastor with Fr. Edward LeFebvre assisting. The parish rose to the top rank of parishes in the diocese of Grand Rapids with 900 families. A language barrier arose about this time and Fr. J.A. Doucet was called upon to minister to the French speaking people. This was only for a year, however, because in 1895 Fr. Doucet became pastor and took care of the united parish. At this time, the lumbering interest moved on and with it many people. The parish decreased to 175 families.

In 1901 Fr. L.S. LaMontague became pastor and served until the fire of 1911, when most of the town and all church buildings were destroyed. Before he left he arranged to celebrate Mass in a Swedish Lutheran Church on Piety Hill across the river in Oscoda. With Fr. LaMontague’s departure, the church committee, with the Bishop’s consent, bought and abandoned German Lutheran Church, also on Piety Hill. This became a mission church of Harrisville, served by a series of pastors with Mass celebrated once a month. 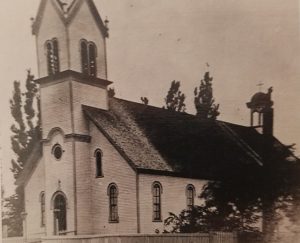 In 1950 Fr. Lawrence Greiner became a resident pastor of Oscoda, also serving Mikado until 1953, and acting as Auxiliary Chaplain of Wurtsmith Air Force Base. By 1951 five Masses on Sunday were necessary. Because of poor health and the work load, a succession of assistants were sent to help with parish activities.

Fr. Greiner resigned for health reasons and Fr. Henry DuRussel arrived in 1953. Bishop Stephen Woznicki asked Fr. DuRussel to begin a search for property to relocate the parish, as the little church was becoming inadequate for the growing population. Ten acres were purchased from Edna Gresham between Lake Huron and US-23. In 1954 the Bishop gave permission to start construction of a parish hall. Upon completion, it had a seating capacity of 400 and an upstairs apartment for the priests. Mass was celebrated in the hall temporarily until a church could be built.

In 1955 landscaping was done and a marble shrine of the Sacred Heart of Jesus was erected in the center of the property facing US-23.

In 1956 the convent, with plans later for a school, was built. The mission Sisters of Holy Ghost of Saginaw came to minister to the community.

In 1961 construction of the new church was completed and was blessed by Bishop Stephen Woznicki. Again Oscoda had a “Beautiful Sacred Heart.” The building projects were blessed with the generosity of Mr. J.J. Hartigan and Campbell E. Wold Foundation of Detroit, the DuRussel family, Wurtsmith AFB, Consumers Power and the great contributions of parishioners and tourists for labor, money and prayers. 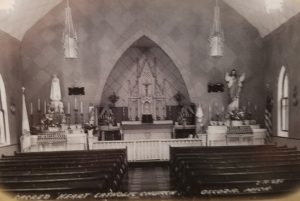 Fr. DuRussel and his assistant, Fr. Edward O’Reilly, served the parish until 1963 at which time Fr. Fred Thomas was assigned to the Oscoda Parish. He was Auxiliary Chaplain for Wurtsmith AFB and the Amley Knights of Columbus. Fr. Thomas had visiting priests to help with the parish work during the summer months. The Sisters of Holy Ghost of Saginaw were replaced by the Charity Sisters of Ohio. Statues of the Blessed Mother and Saint Joseph were donated by Mr. Hartigan and positioned on the front grounds. The Diocese of Gaylord was established in 1971 encompassing the 21 counties of the Northern Lower Peninsula, including Iosco County.

In 1985 Fr. Isadore Mikulski came to the parish. Fr. Mikulski was elected the Administrator of the Diocese of Gaylord when Bishop Robert Rose was transferred to Grand Rapids, before the appointment of Bishop Patrick Cooney. While here Fr. Mikulski made many improvements and repairs to the Church. Some of these were: adding faceted glass windows, adding a new heating system and a new roof. Fr. Mikulski donated a statue of the Blessed Virgin Mary and baby for the forward alcove of the Church as a retirement gift to the parish. Fr. Charles Crowley, who was assigned as Auxiliary Chaplain to Wurtsmith AFB Chapel, was able to help at Sacred Heart after the closing of Wurtsmith AFB in 1993. 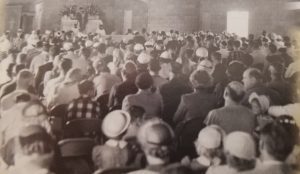 Upon the retirement of Fr. Mikulski in 1995, Fr. James Brucksch was named as his successor. In addition to parish duties here Fr. Brucksch was Vicar General of Gaylord Diocese. He also had 17 years’ experience as Director of the Diocesan Worship Office.

In 2008 construction was completed on the Parish’s new Family Center. The Family Center has a large industrial kitchen and large multi-purpose room that can be subdivided into six individual classrooms for Faith Formation and classes. The Knights of Columbus of our parish sold their hall and relocated to the Parish Family Center bringing together all our Catholic groups under one roof. The Family Center and Social Hall was made possible by the generous donation of so many parishioners both permanent and seasonal. It serves to bring us together as one Family of God.

In 2009, Fr. Charles Donajkowski was named Sacred Heart’s pastor upon the retirement of Fr. James Brucksch. Our parish was happy to hear the announcement that our Pastor-Emeritus Fr. Jim was given the honorary title of Monsignor by His Holiness Pope Benedict XVI in 2012. Msgr. Brucksch continues to serve the parish by celebrating Mass on a regular basis.

Fr. Donajkowski is the current pastor of Sacred Heart Parish.